The DEA's intimidation tactics against doctors causes billions of dollars of additional healthcare expenses for patients, billions of dollars in lost productivity because of untreated pain, and is actively destroying or severely limiting the quality of life for tens of millions of people in America every single day.

The DEA campaign against prescription drug abuse has stigmatized patients in need of pain medication. DEA intimidation tactics and sting operations against doctors have created a climate of fear, with the predictable result that many doctors now won't prescribe opiates at all or are only willing to prescribe amounts that are totally inadequate. As a result, many more people die from not having the prescription pain medications they need, than die from the drug abuse the government is trying to prevent. The DEA is actually killing chronic pain patients by intimidating their doctors.

One of the major causes of those deaths is the overuse of OTC NSAIDS like acetaminophen (Tylenol) and ibuprofen (Advil, Motrin) by people who are desperate for pain relief. The Food and Drug Administration estimates that 200,000 cases of gastric bleeding occur each year, resulting in nearly 20,000 deaths.

Americans are a generous and compassionate people. But they have been brainwashed their entire lives by the constant drumbeat of anti-drug propaganda coming from drug warriors, law enforcement and the criminal justice system, and endlessly parroted by self-serving politicians and the media.

Twenty years ago, the DEA made prescription drug abuse its primary mission after its survival was threatened because of its failure to have any measurable impact on the availability of street drugs. The DEA ginned-up a lot of bogus statistics about deaths supposedly due to prescription drugs by blaming deaths on prescription drugs if there were any narcotics involved, even if the drugs weren't the actual cause of death. Then they cranked-up their propaganda machine in concert with their allies in various public and private agencies who all have one thing in common; they owe their existence to the war on drugs. The media accepts press releases from these agencies and does stories on them without any critical examination of the claims being made. Mothers who lost their children to drug abuse are invited to testify before Congress, giving our representatives an opportunity to exploit their grief in a national spotlight for political gain.

The DEA has focused on doctors who prescribe a lot of pain medications to chronic pain patients because they are easy targets. Doctors keep good records and they have a lot of assets that can be seized. And the DEA is far more interested in seizing assets than they are in seizing illegal drugs. Doctors who prescribe narcotics are now living under the constant threat that they will be arrested by the DEA and prosecuted as if they were running a drug cartel.

Once arrested and stripped of all his assets, a doctor will be charged with tens, if not hundreds of individual crimes, so that they will be under tremendous pressure to plead guilty to lesser charges in order to avoid a lengthy prison sentence. Many doctors who are totally innocent cave-in and accept a plea bargain because they know the odds are stacked against them.

In a criminal trial, a jury of ordinary people are asked to decide whether a doctor's care was appropriate, based on the testimony of competing experts on both sides. Prosecutors who want to portray a compassionate doctor as a common drug dealer will hold up bags of pills and argue that the doctor was operating "outside the bounds of legitimate practice." One way they do that is by trying to confuse the jury about what the legal definition of "Standard of Care" really means.

"Standard of Care" aka Reasonable Physician Standard of Care is legally defined as being based on what the science (as reflected in the medical texts and journals) indicates is appropriate care.

But prosecutors and their hired-gun experts attempt to use "Community Norms" to show that the doctor is operating way out on the fringes -- beyond what "most doctors" would do. Community Norm is defined as what most doctors would do, but most doctors are afraid to do the right thing because of the chilling effects of DEA intimidation tactics.

Doctors who aggressively treat the patients who need the most pain relief are actually doing the right thing, based on any reasonable interpretation of the science. That puts those doctors outside the norm, and in the DEA's crosshairs, because most doctors won't prescribe ANY narcotics for chronic pain. Only a small percentage are willing to prescribe narcotics for the treatment of chronic pain, and the overwhelming majority of those will only prescribe to their comfort level, rather than their patient's. The tiny percentage of doctors who are courageous enough to put their patients welfare first are under constant surveillance by the DEA and routinely subjected to DEA sting operations.

You can make a difference, and you should try, because you and everyone you care about is at risk for having their life destroyed by untreated pain. Do not accept without question what is being spoon-fed to you daily by those who profit from denying pain medications to people who need it the most.

The Drug Enforcement Administration has been transformed into a global intelligence organization with a reach that extends far beyond narcotics, and an eavesdropping operation so expansive it has to fend off foreign politicians who want to use it against their political enemies, according to secret diplomatic cables. In far greater detail than previously seen, the cables, from the cache obtained by WikiLeaks and made available to some news organizations, offer glimpses of drug agents balancing diplomacy and law enforcement in places where it can be hard to tell the politicians from the traffickers, and where drug rings are themselves mini-states whose wealth and violence permit them to run roughshod over struggling governments.

The Drug Enforcement Administration is losing more guns than it was about five years ago, the Justice Department's inspector general said. Auditors said the DEA lost 22 firearms and had an additional 69 stolen over the 5½-year period. The stolen weapons included pistols, rifles, shotguns, and a submachine gun.

The majority of stolen guns had been left in an official's car, despite a policy prohibiting leaving a weapon unattended in a vehicle. The report cited examples of guns stolen from cars parked outside restaurants, hotels, schools and gyms. Some agents had their guns taken from their cars while they were shopping or getting coffee. One firearm was stolen while the car was at the body shop.

U.S. Department of Justice
Office of the Inspector General
"For most seizures we tested, we found no documentation indicating that a witnessing agent or task force officer was present at critical stages of the cash handling process. Further, we found many instances in which agents and task force officers generally did not count the seized currency; did not provide a receipt to the subject from whom the currency was taken; did not complete documents transferring custody of the currency to an evidence custodian; and did not record the receipt, transfer, or disposal of the currency in a temporary or permanent control ledger."

What's up with Prescription and
Over-the-Counter Drugs? 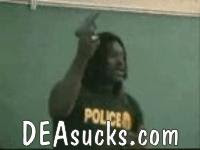 DEA agent shoots himself in the foot
"I'm the only one in this room professional enough,
that I know of, to carry a Glock 40." BLAM!
Update - Lee Paige, the DEA agent who shot himself in the foot while demonstrating gun safety to schoolchildren was only suspended for five days. This real-life "Barney Fife" then sued the DEA over release of the video that made him famous. His law suit was dismissed by a federal judge.

The DEA, Diversion and the War on Drugs:

The DEA War on Hydrocodone
The DEA wants to classify hydrocodone the same way it does Oxycodone. If hydrocodone became less available, we could expect potentially 8,000 more deaths from stroke and heart attack every year. And, although there's no way to reasonably estimate the number of people who will suffer bouts of depression, thoughts of suicide and actually commit suicide after being denied adequate pain medication because of the DEA's increasingly draconian measures, it's safe to assume that number will be in the millions...

Reefer Madness: The Federal Response to California's Medical Marijuana Law
Marijuana is unique among illegal drugs in its political symbolism, its safety, and its wide use. California's law seems to have engendered a uniquely harsh federal response because California is a large, trend-setting state; because its new marijuana law is very broad as compared with others; and because the law was passed by popular referendum...

The Pain Crisis in America
There is a Pain Crisis in America. Its primary manifestation is the routine and widespread under-treatment of pain, especially chronic, non-cancer pain. Other manifestations include a severe and growing shortage of physicians willing to prescribe morphine and related opioid analgesics, the widespread use of more toxic and less efficacious classes of medications in an effort to avoid opioids, and the profound distortion of medical education and of the doctor-patient relationship...

Victimized Doctors
Doctors throughout the country are being targeted by the DEA for helping patients manage crippling pain with prescription drugs. There is no presumption of innocence. Collateral damage to patients and physicians' families is the norm. "Our office will try our best to root out (certain doctors) like the Taliban" boasted US Attorney Gene Rossi..

American Medical Association (AMA) Policy Statement on Pain Management Using Opioid Analgesics
Preventing drug abuse remains an important societal goal—it should not hinder patient’s ability to receive the care they need and deserve or discourage physicians from prescribing pain medications when medically appropriate. The AMA is committed to the goal of protecting the legitimate use of prescription drugs for patients in pain...